Welcome to jBASE's new documentation site! Many answers to your questions can be found by searching the Knowledgebase or viewing the jBASE Documentation. We also have a Google Group for peer discussion about jBASE. If you are unable to find the information you are looking for, jBASE Support will be glad to assist in resolving your technical problems. Enjoy and please provide comments and feedback .

How can we help you?

BACK TO MIGRATION STATION

This document describes the various technical and architectural differences between Rocket’s D3 MultiValue Database and Zumasys jBASE. It is designed to be high-level enough to be understood by non-technical business managers looking to understand the benefits of jBASE over D3. It is also designed to address technical issues at a fairly low level so that the technical reader may understand potential technical challenges that may be encountered during a D3 to jBASE migration, along with potential solutions.

jBASE shares many common characteristics with D3. jBASE’s remarkable compatibility with D3 is owed to these similarities. The casual application user will notice no differences, other than improved performance, between D3 and jBASE. However, administrators and software developers will see remarkable advances in how data and code are organized within jBASE.

Elements of jBASE vs. D3

D3 Developers may transition their current development skill sets to jBASE with very little change. Like D3, jBASE organizes BASIC code into PROGRAMS and SUBROUTINES. The code is compiled exactly the as in D3. 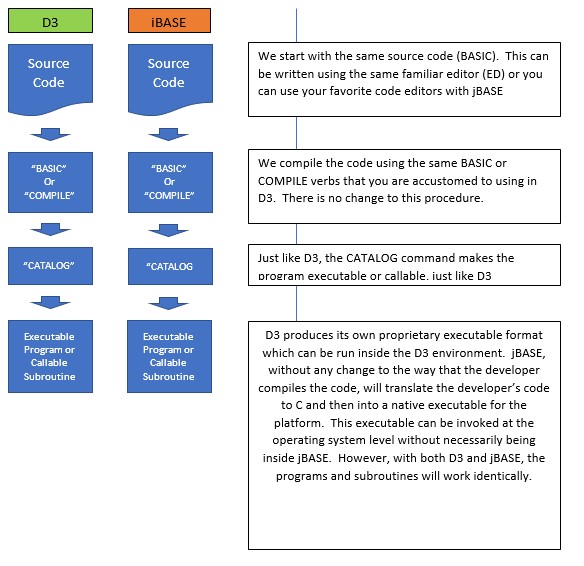 Common Issues when converting from D3

jBASE provides a configuration file called config_EMULATE which exists in the jBASE "config" directory. This configuration file contains a series of switches that can be set to alter the behaviour of various features and functions of jBASE. Another file within the same directory called config_EMULATE.txt provides expanded documentation for each switch setting. Within this file, you will see named headers describing various multi-value platforms. D3 is one of these named platforms. The settings that Zumasys recommends for systems that are migrated from D3 can be found under this header within the file. jBASE will apply these settings on process start-up by first examining the environment variable JBCEMULATE and then using the value of this environment variable to find the correct heading within the config_EMULATE file to apply. Setting JBCEMULATE is vital in order to allow jBASE to properly emulate D3 behaviour.

jBASE, by default, is a case sensitive system so some preparation work must be performed to configure your jBASE installation so that it will behave like D3 (case insensitive). Failure to properly configure jBASE to be case insensitive can lead to application behavioural differences that can range from minor to major.

D3 developers are encouraged to spend a few minutes reviewing the installation and configuration advisories and notes prior to migrating their D3 data and/or code to jBASE. A few minutes spent up front can save a lot of effort during the migration and testing.

There are hundreds of vectors that can be called to return a wide variety of system information. Unfortunately, the vector numbers used on D3 may not be the same number as used on jBASE. So, code that is written to reference a specific vector on D3 may need to be changed to a different vector number on jBASE.

[editor’s note] Bruce Decker has a utility which scans source code and changes SYSTEM() vector numbers automatically. It also perform other expansions in cases where a SYSTEM() vector on D3 has to be changed to another function call on jBASE.

Expected differences between D3 and jBASE:

then run the “UpdateMD” program to populate it with the standard jBASE verbs.

will find the location of the CUSTOMER file.

Whether a file is available in a particular account is mainly determined by the setting of the JEDIFILEPATH environment variable, which defines a list of directories in which to search for jBASE data files. Although no MD entries are created when a file is created, “F” and “Q” pointers are still supported and there is a knowledgebase page devoted to “F” and “Q” pointer resolution to be found here.  If there are instances of “Q” pointers “pointing to” “Q” pointers, then the JEDIENABLEQTOQ environment variable may need to be set.

Switching between the three can be accomplished by the use of function keys (F1 for jsh, F2 for sh, F3 for msh), or Esc OP for jsh, Esc OQ for sh, Esc OR for msh.

jBASE also provides a set of Extensions which can be used to manipulate sequential files.

Optional ON ERROR and LOCKED clauses are also provided along with required THEN/ELSE clauses. Existing BASIC code without any ELSE/THEN/LOCKED syntax will not compile.

As an alternative to SELECT, It is possible to populate a dynamic array with the results of your query on the index:

Was this article helpful?

Please fill out the contact form below and we will reply as soon as possible.

Not finding what you're looking for?